The Maison SOLER in the National and International Presse

Home
>
Press
>
The Maison SOLER in the National and International Presse

In Cantal, Jorge Soler sublimates ostrich skin, a unique know-how in France. Find an AFP article taken up by the main media. 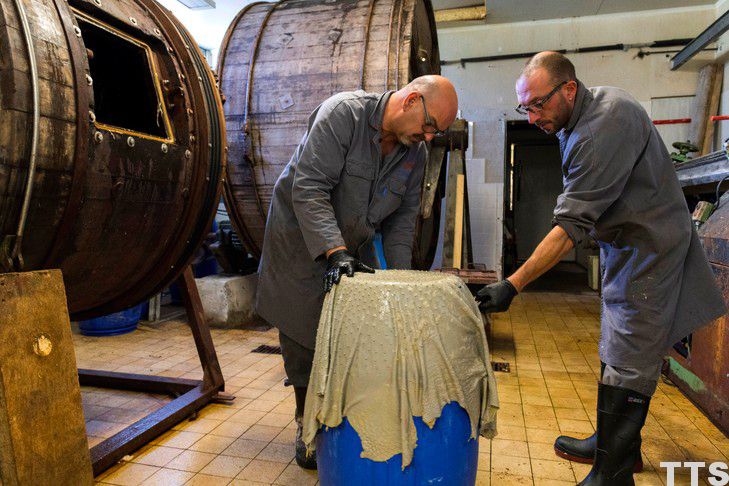 An air of Spain in a small corner of Cantal: with his singing accent, Jorge Soler is inexhaustible on the tanning of ostrich skin, a precise and delicate know-how that he is the only one to master in France.
His “showroom”, installed in the former nursery school of Neussargues-en-Pinatelle (Cantal), a village of 1,800 inhabitants, is as unusual as the character.

When he pushes the door, the visitor comes face to face with an imposing stuffed bull which sits in the middle of a room where the skins of cattle rub shoulders with the heads of deer and other horned animals displayed on the walls.
Because Jorge Soler, who arrived from Barcelona in 2008, is also a taxidermist.
First settled in Nîmes (Gard), this bullfighting enthusiast finally joined Neussargues-en-Pinatelle where he acquired a workshop next to the village slaughterhouses. He continued his taxidermy and tannery business there.
Then the adventure began in 2017 when an ostrich breeder offered him to try his hand at tanning this highly sought-after leather that the big luxury houses often bring from South Africa, the world’s leading producer of these birds. For a year, he “messed up” several skins, “a disaster”, he remembers. But he perseveres until he achieves an impeccable product, without a hitch.
The warm 50-year-old with a salt-and-pepper goatee proudly shows off a clothes rack where several shiny, pearly ostrich skins are neatly arranged.
About one meter on a side, these luxurious leather squares in various colors are used for small leather goods or watch straps. They can be decorated “to measure” affirms the Barcelonian.
– “Metal-free” dye –
“Ostrich skin is a very delicate and at the same time very resistant leather. The most complicated thing is to manage to do a manual, artisanal defleshing (remove the flesh), without breaking the pimples – the pearl of the skin as it is called – which support the feather”, he explains.
These pimples give the skin its pearly appearance, characteristic of ostrich leather.
“The risk is to make holes, the skin is then unsaleable” according to him.
In the skinning room, open to the four winds – it is down to -7 degrees in winter and impregnated with a pestilential smell, the first step is therefore to rid the skin of its thick layer of fat.
With a knife, Jorge Soler – boots and large white apron skilfully cuts the pieces of flesh to separate them from the skin, stretched out in front of him on a wooden instrument that he himself made, from a trunk of sanded shaft, fixed to a metal support.
Then head to the fullers, large wooden barrels rotating like mills to tan skins.
Verification of the PH, dyeing, regular monitoring: the actual tanning represents “between eight to ten hours of work. We get up in the morning, in the evening and sometimes at night” says Olivier Tible, one of the three employees of “Maison Soler”.
The dye powder is guaranteed “metal-free”: no chrome, no aluminium. And the small company has embarked on the construction of a “zero toxic discharge” treatment plant which should be operational in 2020.
“From the raw salted skin to the finished product, it takes about a month and a half, two months of work,” assures Mr. Soler.
Now, a dozen breeders wishing to promote short circuits call on him.
But he aims to sell his finished skins directly to leather goods, highlighting the “made in France”, or even to produce small leather goods himself. “We have the capacity to manufacture 2,500 to 3,000 skins per year,” he says.)